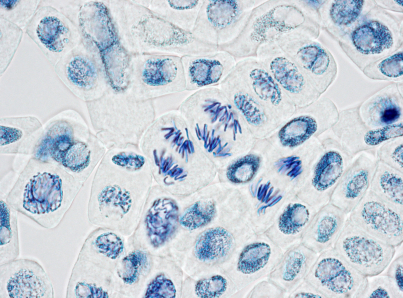 Visible chromosomes in (vegetable) cells made up of bundles of genes

Which is most important – genes or environment? As time goes on more and more genes are being found that have a bearing on an individuals  predisposition to a particular disease. Some genes are fairly rare in the general population but when present give a large increase in the disease. Others are fairly common and only cause a slight increase in predisposition to the disease.

Having even a prominent disease giving set of genes does not mean that any disease is inevitable as it may be possible to adjust our environment to prevent the disease.

The best example of this is vitamin C. Vitamins are essential substances to have in our diets for our health as by definition we are unable to make them from other substances. Interestingly we are the only primates that do not have the ability to make ascorbic acid i.e. vitamin C. So all humans (compared to other species) have a genetic defect that prevents us making vitamin C. We have to  adjust our environment and ensure that we have some vitamin C – present in fruit and other sources, to prevent scurvy the eventually fatal disease of vitamin C deficiency. Happily, for most of us, taking adequate amounts of vitamin C is not difficult and most of us don’t succumb to this genetic ‘disease’ that we all have because of our environment.

The other example is a disease called phenylketonuria. This a genetic disease which if not detected within days of birth, the usual protein in the diet of the baby causes irreversible brain damage. This genetic disease has been prevented by all infants which is now part of their early  heel-stick blood tests to identify those with this genetic disease and then changing their diet by not giving the baby any protein with the amino acid phenylalanine in it. This diet has to be continued especially whilst the brain is growing but is usually recommended for  life.

Those involved in investigating a genetic predisposition hope that with that knowledge an individual might try to take actions to change their lifestyle or diet to make it less likely that they will get that disease. For persons at very high risk of a disease the possibility of medications or even surgery  to remove a particular organ when the presence of a particular gene indicates a strong likelihood of disease. Genes like this are usually uncommon but can be frequent in certain families or communities. Such genes include those for a predisposition for breast cancer, those for a predisposition for colon cancer, and those for extremely high levels of cholesterol.

There are always negatives as well as positives about knowing about genes  as in most things in life and medicine) persons should consider the effect of this on themselves e.g. insurance; on other members of their family and consider whether they are likely to take action. However, the knowledge of the presence of certain genes can allow for actions which can sometimes help prevent disease or even death.

A patient who notices a pattern of disease in their family should discuss it with their physician. It should be noted that with relatively small families these days that relatives beyond the immediate family  should be considered such as grand-parents, uncles, aunts and cousins especially when a diseases seem to occur at a younger age than expected.

Genes or environment both are clearly very important in disease.