Would you like an HIV test with that – HIV testing is now routine?

HIV treatment is now incredibly effective. HIV treatment keeps infected persons alive and while they take treatment they are less likely to pass on the virus during sexual intercourse. The ability to treat HIV has changed considerably since it was initially discovered when a positive status was often associated with considerable fear. With more effective treatment and as treated patients are less likely to pass on the infection to others, HIV testing and therefore treating more patients will reduce the transmission rate further and allow the number of true new cases to be reduced.

Whilst knowledge of HIV status by HIV testing will not change all persons risky sexual behavior it makes sense that as many people as possible are tested and started on treatment. So not only those in groups traditionally associated with most risk but now anybody at any potential risk.

New recommendations have been produced by the US body in charge of recommending what preventative strategies are useful at preventing disease. That body is the USPSTF who were set up to examine the benefits of and risks and downsides as to what medical checks should be done in apparently healthy people to look for illness. The USPSTF now recommends that all persons from ages 15 up to 75 be screened by HIV testing. 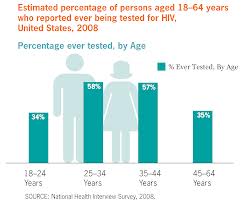 Not everybody has been for HIV testing

Whilst additional costs of HIV testing will occur and there are costs involving treating the new cases identified by this screening program however once identified and treated even if they do not change behaviour ( as many will) as long as they stay on treatment it will be less likely that they will pass the virus to others.

In Cayman large sections of the community are tested at various times for immigration, employment and insurance purposes.

HIV treatment for appropriate individuals is at present borne by the Cayman Islands Government.